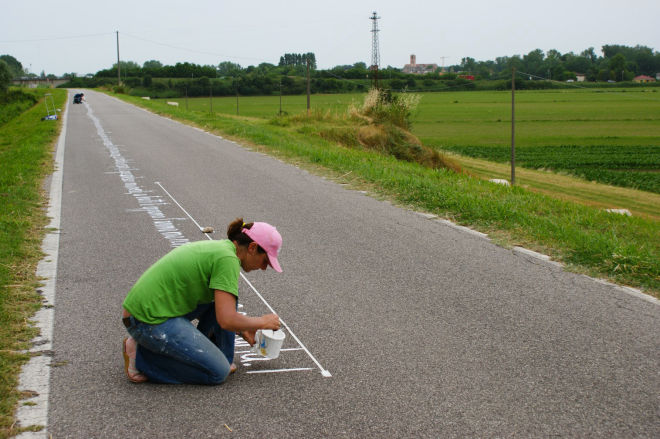 Stefania Galegati Shines (Bagnacavallo, Italy, 1973) studied visual arts at the Academy of Fine Arts in Bologna and Milano with Alberto Garutti.
She was part of Via Fiuggi, a group of young artists who lived together in Milan in the late nineties.
She works with different media; she likes to shift semantic mechanisms in things and people.
She exhibited for the first time in 1994 in Viafarini. In 2003 she moved to New York with the International Studio Program at PS1 MoMA and she stayed for some years. She lived without a permanent base moving between New York, Buenos Aires, Tanzania and Europe.
Since 2008 she lives in Palermo, where she nested with her family.
From 2015 to 2018 she co-managed Caffè Internazionale: a local venue, multicultural and multidisciplinary center and artwork.
She currently teaches Painting at the Academy of Fine Arts in Palermo.
She works with Pinksummer, Genoa, since the beginning of their career and with Francesco Pantaleone, Palermo since 2007.
She is a co-founder of the Isola delle Femmine Project collective, with the actual task of purchasing Isola delle Femmine (PA), a little island off the coast of Sicily.
She is also co-founder of the Palermo Summer School of Contemporary Art: a yearly independent summer school of art since 2015.